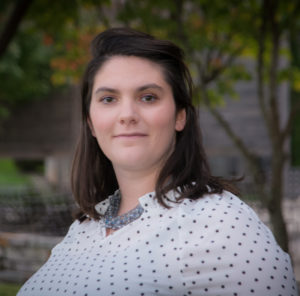 Katelyn, her husband Jon, and her daughter Emery currently live out in Centerton.  They share their house with two dogs, Dexter & Athena.  Katelyn spends a lot of her free time with her family that moved to NWA in the last year.  She is an avid crafter and diy’er in her spare time and loves to re-do old pieces of furniture.  Katelyn also likes to nerd-out with anything Harry Potter related and enjoys doing puzzles as a way to de-stress.

Katelyn is from a small town in SE Missouri  on the “bootheel”.  After graduating high school in her hometown she began studying Architecture at Drury University in Springfield, MO.  Two years of torture later she transferred to Missouri State and earned her degree in Hospitality Management.  After college Katelyn moved to Tucson, AZ to run five food and beverage outlets at a 4-Star resort.  From there she was offered her dream job; an Event Specialist at the local zoo.  After two years in AZ Katelyn and Jon relocated to Colorado Springs.  It was in Colorado that Katelyn and Jon married and had their daughter Emery.  In 2015 Jon was relocated again with Sam’s Club and landed here in NWA.  She currently works for Sam’s Club herself as the Replenishment Manager for all of dotcom food and beverage.

Katelyn was lucky to work with the JL of Springfield while in college and planned to join as soon as she was eligible.  She was in her provisional  year with the Tucson League when she relocated.  However, those short months with that League has helped her share ideas and experiences in her roles with the NWA League.  Katelyn went through her provisional year with the NWA League in 2015.  She has served as the DVAP Vice-Chair and Chair her first two active years in the League.  This year Katelyn is serving as the Community Manager and can’t wait to see the great things our accomplish.

Katelyn is actively involved with the local chapter of the Cystic Fibrosis Foundation.  Katelyn’s daughter Emery suffers from this difficult genetic disease and tries to spread awareness everywhere possible.  Katelyn also has a deep passion for our League focus area of Domestic Violence Awareness and Prevention.  She lends her time and skills to several area organizations that help promote that mission.

The Junior League of Northwest Arkansas has allowed Katelyn to support causes near and dear to her heart.  It inspires her to be a better human, woman, wife, and mother in her everyday life.  She sees the leadership skills our League can draw out of our members and wants to continue to cultivate that training of women.  Katelyn has a passion of supporting other women and hopes to continue her League career in other leadership roles.