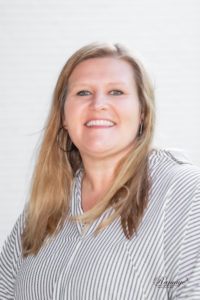 Meri Haynes moved to Northwest Arkansas over four years ago and lives with her husband, Chet, and his two girls, Loren and Olivia. As a native of Nashville, she loves live music.  When not serving the League, Meri can be found cheering at volleyball games, visiting farmers’ markets, enjoying the outdoors or spending time with her family and friends.

Meri grew up in middle Tennessee.  She has a BBA with Accounting focus and MBA from Middle Tennessee State University.  She started her career in public accounting, working at several regional and local firms in Tennessee, prior to jumping into CPG with Mars Petcare.  Meri had several roles at Mars that took her from Tennessee to Ohio and now NWA.  She has an inactive CPA License in the state of Tennessee.  Meri is currently Commercial Finance Manager at L’oreal.

Meri joined the NWA Jr League in 2016 when she moved to the area.  She has served on the Volunteer Action and Purple for a Purpose Committees, in addition to League’s finance Manager.  Prior to moving to NWA, she was a member of the Nashville League for two years.

The Junior League of Northwest Arkansas was the first organization Meri reached out to when relocating to NWA.  The league was a great way to network and get to know the NWA area.  She has made lifelong friends through the league while giving back to the community.  She is proud to be a part of an organization that is committed to voluntarism, developing women and improving the community.