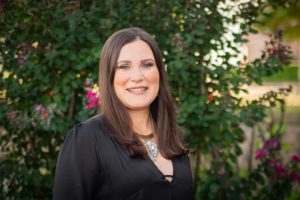 An Arkansas native, she holds a BBA in Marketing.  She is currently a Senior Manager at Timex Group USA and prior to her current position,  she worked for transportation conglomerate JB Hunt where she held roles in Fleet Management, Partnership Development, and Intermodal Pricing. She was named to NWA Business Journal‘s 40 under 40 class in 2017.

Jennifer joined the Junior League of Northwest Arkansas in 2013.  She has both Vice-Chaired and Chaired the Winter Dreams Tour of Homes.  She has also held the role of Communications VP, Development VP, Purple for a Purpose ad-hoc committee member, and Secretary.  In 2016 she was awarded League’s Community Star Award.

Outside the League, the Taylor McKeen Shelton Foundation is her passion project.  Founded in honor of her friend’s son who passed away from SUDC in 2013, for the last eight years, she has served on the Leadership Committee and now Co-Chairs the event which aims to drive awareness and prevention to SUDC.  It is the 5th Leading cause of Death in children ages 1-4 and currently receives no public funding.  They plan an all-day fundraiser in NWA each June which begins with a 34 team Golf Scramble and ends with an evening reception with a live and silent auction.  They have raised almost one million dollars for SUDC research and prevention.  She is also in the early stages of starting a foundation in her mother’s honor which will focus on mental health awareness and suicide prevention. She has also been known to decorate the trees at the NWA Boutique show.
Giving back to the Community and supporting other Women are 2 of Jennifer’s biggest passions.  She dedicates so much of her time to helping others as it is so important to her to lend a helping hand as often as possible.  Supporting and building one another is where we begin to make this world a better place.   She also loves fireworks and Christmas.  She might or might not stuff 9 trees in her home each year and host an annual Christmas in July party just to get the most use out of her decorations while combining her love of fireworks.