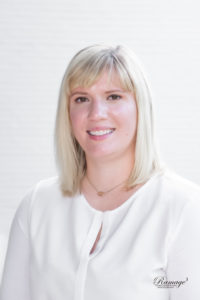 Emily Rector moved to Northwest Arkansas six years ago and lives in Rogers with her cat, Henry, and dog, Tex. In her free time, Emily loves to explore the trails in NWA and loves to catch up on the newest Netfilx show.

Emily grew up in a variety of places, moving frequently for her father’s career. She has lived in 3 different countries and 8 different states. Emily calls Houston, Texas home, as she spent more time in this area than any other. Emily attended Texas A&M University in College Station, Texas where she obtained her bachelor’s degree in English. After graduating, Emily spent time working in professional sports before moving to NWA and working as a meeting and event planner.

Emily joined the Junior League of Northwest Arkansas in 2016. In her first active year, she served as the Vice Chair of Activities & Arrangements and took on the role of Chair in the following year. She served as Chair of Member Services in the 2019-2020 league year before taking on her current role.

Emily joined the Junior League as a way to meet new people, but quickly developed a love for the League’s efforts to enrich and serve our community.