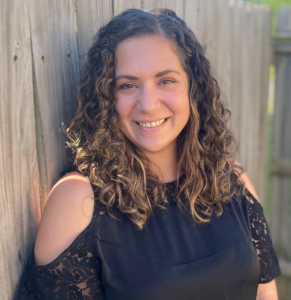 Ashley Peterson is originally from The Woodlands, TX. Her eyes were opened to volunteer work and community service through her relationship with her grandparents, who took pride in giving back to their community during their retirement. After graduating from high school, Ashley attended Texas Tech University (TTU) where she graduated with a BA in History and BS in University Studies. While at TTU, she met her husband, Blaine, in true Texas Tech fashion, while wrapping the Will Rogers Statue before a home football game. Throughout college, she volunteered at the Ronald McDonald House. This organization is important to her since her family used the Ronald McDonald House regularly during her little sister’s open heart surgery in 2005.

After college her family moved to Wichita Falls, Texas where she began her career teaching high school science. While teaching, she fell in love with the community and the students she taught. Ashley looked for an organization to join to help her continue serving the community outside of her work. This led her to join the league in 2017.

Ashley’s family moved to Northwest Arkansas in May 2018 for her husband’s job at Pratt & Whitney. She joined the Arkansas Connections Academy (ARCA) team as a science teacher during the 18-19 school year and served as the District Testing Coordinator during the 19-20 school year. Ashley is currently the Middle School Assistant Principal at ARCA and finished her masters in Educational Administration and Supervision in August of 2020.

During her time in the league, she has served as a member on the International Friendship Committee in Wichita Falls and chaired Touch-a-Truck and the Moonlight Masquerade committees in Northwest Arkansas. Last October, she had the opportunity to attend the AJLI Organizational Development Institute (ODI) and learned so much from ladies representing leagues across the country. She loves being a part of the work JLNWA does in the community and looks forward to continuing her service to her students and community.