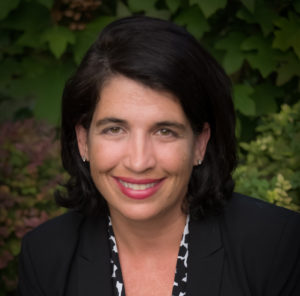 Jennifer McCloskey Quezada moved to Northwest Arkansas six years ago and  lives with her husband Dan and their three boys in Rogers.  When not serving the League, Jennifer can be found fundraising for her children’s schools, eagerly awaiting results at a high school Quiz Bowl tournament, or cheering on her boys in a basketball or soccer game.

Jennifer grew up in Miami, Florida and lived their until her move to NWA.  She is a graduate of Smith College in Massachusetts and the University of Miami, School of Law.  Jennifer is licensed to practice law in Arkansas and Florida.  She works in the Global Ethics and Compliance Office of Walmart Stores, Inc. Prior to her role at Walmart, Jennifer was an Assistant Public Defender in Miami-Dade County and  later, owed her own private law practice.

Jennifer is actively involved in her children’s schools and is passionate about the quality education available in Northwest Arkansas.   She appreciates how the League has connected her with the community she now calls home.  Jennifer volunteers for the LPGA tournament and was a volunteer at the inaugural Bentonville Film Festival.   Jennifer and her teenage son volunteer together with the Young Men’s Service League. Jennifer supports many local non-profit organizations and can often be found about town at the many fundraising events in our community.

The Junior League has been a driving force in Jennifer’s life and she is passionate about passing on an  appreciation of the League to a new generation of trained volunteers.