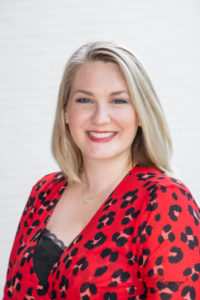 Beth Emmanuel returned to Northwest Arkansas nine years ago and lives with her husband, Joe, and their two daughters, Evelyn and Tessa, in Fayetteville.  Also living with her family is Beth’s beloved dog – a shih tzu named Wookie – who has been her companion for over 14 years.   In her limited spare time, Beth enjoys cooking, crafting and sewing.

Beth grew up and graduated from high school in Fort Smith.  She then headed up “the hill” and attended the University of Arkansas where she obtained both her BSBA and Masters degree in Accounting.  After graduating in 2005, Beth began her accounting career at Ernst & Young (now EY) in Rogers and rose to the level of Senior Accountant in charge of the Tyson Foods, Inc. engagement.  In 2008, Beth moved to Dallas, TX and began working for Stream Realty, LLP  in the property management group as a Senior Accountant.  Before her return to Northwest Arkansas in 2011, Beth became a Manager in the property accounting group and decided to “retire” upon her move.  Her retirement was short lived, however, when in 2017 she established Emmanuel C2C, Inc. and now works with local real estate agents handling their administrative work so they can spend their talent, time, and energy with their clients.

Beth joined the Junior League of Northwest Arkansas with the 2013-2014 New Member Class as a part of the purple group.  She was one of the leaders responsible that year for the Legacy Project – the first ever Departure Packs.  She then served as Vice Chair of Mission Marketing, Vice Chair of Moonlight Masquerade and Vice Chair of Fund Development before becoming the Development Manager for the 2016-2018 league years. Beth was elected President-Elect for the 2018-2019 league year to prep her for her years as President, which is a two year term from 2019-2021.

For the past five years, Beth has been a part of the Tee Off for Taylor event planning committee for the Taylor McKeen Shelton Foundation; raising over $100K annually.  Beth has also volunteered and held leadership positions with many different non-profits in Northwest Arkansas over the years.

Joining the Junior League was a way for Beth to give back to her community, but it has been so much more than that.  The League has made her friends for life as well as helped her grow into a better leader and community servant.   Through her membership, she has been offered experiences and had doors opened she never thought possible.